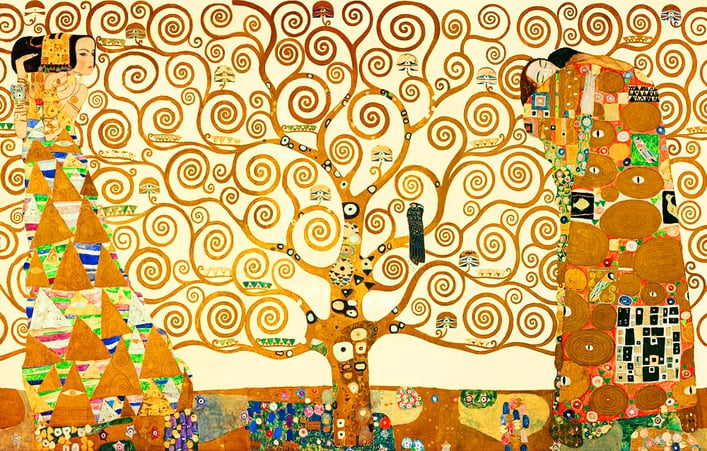 The frieze is a famous mural consisting of three mosaics – a female figure entitled Expectation (or The Dancer), followed by The Tree of Life, and then an embracing couple called Fulfilment or The Embrace. The Tree of Life is the centerpiece, and additionally forms the background for the other two figures, with its swirling branches as such patterning the whole of the Frieze. There is also an additional, smaller panel, depicting a Knight. The Stoclet Palace itself was considered a beacon of the Art Nouveau – or Jugendstil ­– values, and with the asymmetrical and exaggerated lines of the building’s design, it was seen as a building of Modernity, as well as an example of the much-sought-after Gesamtkunstwerk – a total or ideal work of art. Klimt and the architect Josef Hoffmann (1870–1956) both worked on the palace, and they had long shared a common vision of the purpose of art, marked by their joint founding of the Vienna Secession in 1897. They shared artistic and social activities, frequenting the same circles and often working alongside one another in setting the new standards for art in Vienna. Both were considered avant-garde, and their first joint projects were indicative of a transitional phase from the decorative and floral Art Nouveau to a stark formal principle primarily oriented towards orthogonal structures. In the case of the Stoclet Palace, the tastes of the patrons, who were great collectors and rich, cultural figures of the day, coincided well with Klimt’s interests, and influenced much of the design of the palace. 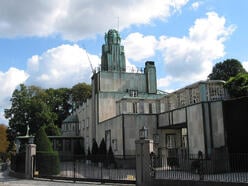 In 1904, Hoffmann received a commission to build a mansion in Brussels for a young Belgian industrialist, Adolphe Stoclet (1871–1949). Between 1905 and 1911, Hoffmann and the Wiener Werkstätte (Vienna Workshops) built the Stoclet Palace. The Palace was the first residential project for the Wiener Werkstatte, which had been co-founded by Hoffman in 1903, and the team designed every part of the palace. It became one of the grandest monuments of the Art Nouveau era. Hoffman even designed a theatre within the Palace Stoclet – dances were performed there by Diaghilev’s Ballet Russe – and it was designed for display. The Stoclets enjoyed playing host at the palace, and entertained there regularly, with guests and a circle of friends that included such other avant-garde figures as Stravinsky, Diaghilev, Debussy and Jean Cocteau.

Klimt decorated three walls of the dining room with a mosaic frieze consisting of nine panels. Using expensive materials including enamel, glass, ceramics, metals, coral, mother-of-pearl and semi-precious jewels, his Stoclet Frieze offset the clean lines of Hoffmann’s building and furniture, while the ornate panels feature symbolic motifs. He had learned the technique of mosaic at the Kunstgewerbeschule and had been further inspired by the mosaics of Ravenna, but he also considered Stoclet’s interest in Indian and Buddhist art and, as always, researched the work intensely before completing it. His resulting exotic designs included elements of Asian and Byzantine art. The triangular leaves and circular flowers of The Tree of Life, the frieze’s main motif, suggest the sacred myths, religions and philosophies of various cultures. 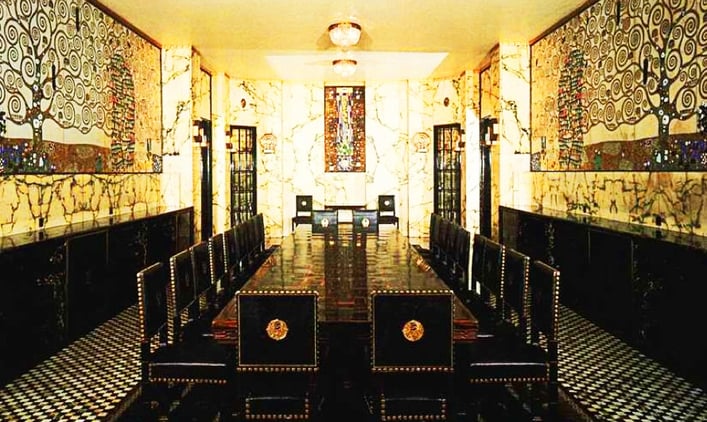 Influences from all over

After his trip to see the Ravenna Mosaics, Klimt was very impressed with what he saw and his appreciation translated through to his work, when he began to produce elaborate, very ornate mosaics. The fact that the Stoclets’ interests came so close to Klimt’s own no doubt helped him produce an art that matched their tastes. The Stoclets collected ornaments, artefacts and ideas from all over the world, including Egypt, China and Persia, and that the frieze uses components from Asian, Japanese and Ancient Egyptian art is no coincidence. The gesture and position of the ornamented, decorated figure of the dancer in Expectation is particularly redolent of Egyptian art, and the rich gold colour, encrusted gems and geometric patterns in her dress make for an embellished show of sanctity and wealth. In a 1992 edition of The Art Bulletin, an article by M.E. Warlick on the Egyptian content of the Stoclet Frieze unpacks the possible inspirations for Klimt’s Dancer, though concludes that Klimt’s identification of her ‘cannot yet be traced to a specific dancer or dance’. This somewhat mystifies the figure, and suggests that she is the result of a combination of sources, which has produced a glitteringly unique vision that is on the brink, awaiting and expectant of, a defining moment. The same article uses the Egyptian myth of the resurrection of Osiris by Isis to colour an understanding of the two figures in The Embrace. Osiris is associated with the underworld, and with the sprouting vegetation and life growing up out of that world. When provided with this context we can see that The Tree of Life, with its abundance of branches, is the connecting force in the frieze and can be understood as the result of the resurrection of Osiris and his reunion with Isis. Klimt had of course depicted couples embracing before, most notably in The Kiss (1907–08), but also in Love (1895), Philosophy (1899–1907), and the Kiss in the Beethoven Frieze (1902), though his use of Egyptian motifs in the Stoclet Frieze lends an extra dynamic to Fulfilment, especially when regarded as a story panel in conjunction with The Tree of Life.

Throughout history, people have been repeatedly drawn to gold and its colour, and the Stoclet Frieze, packed with the gems afforded by its patrons, is intriguing as much for its ornamentation as it is for the layers of multicultural myths that adorn the content. That the tree’s branches stretch out in and beyond the frieze while firmly rooted down in the center of the image gives added weight to its symbolic appeal. Some interpretations believe the tree of life to encompass the underworld, earth and the heavens all in one. The black bird, so often in cultures a symbol of death, perches comfortably on one of the branches of Klimt's tree of life, suggesting that the frieze, as with the palace, aimed for a sort of all-encompassing art. The Stoclet Frieze was the last of Klimt’s mural works, and it is easy to see why The Tree of Life has captured the interest and interpretation of many. All bursting out from the same ‘root’, an abundance of spiralling branches twist and turn, and the arrangement of swirls in different shapes and sizes creates the pattern – the varied fruits springing forth only add to the impression of a revitalizing, opulent rebirth; a rebirth, possibly, of ideas, mythology and art. 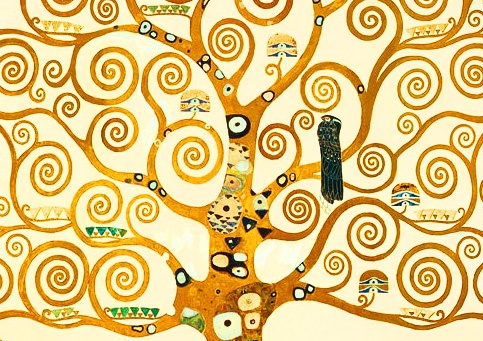 Admire Klimt’s Tree of Life with our new beautiful sketchbook [ISBN: 9781783613663], which you can buy here from our website, or here on Amazon. If you’re interested in reading more about Klimt’s artwork in general, our book on Klimt’s Masterpieces of Art [ISBN: 9781781361924] can be bought here.