This meant that artists had to get their hands dirty and observe, even sometimes participate, in the dissection of cadavers, earning a more intimate understanding of the body and its workings (even though this practice was illegal). The pursuit of anatomically correct figures was a key element of the High Renaissance art movement. Paintings like Michelangelo's The Creation of Adam are said to epitomize this period due to their scale, complexity and lifelike human figures. 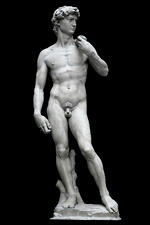 Some of Michelangelo's most interesting images are of many bodies interwoven with one another. His relief Battle of the Centaurs shows a complex grouping of several figures, all accurately rendered and interacting with one another. We can also look to The Last Judgement, an expansive fresco detailing a broad range of figures painted in the anatomical style so distinctive of the High Renaissance movement – all figures boasting defined muscles, realistically contoured skin and protruding tendons.

Of course one cannot speak about Michelangelo's mastery of anatomy without addressing his masterpiece, David. This iconic sculpture shows the immense talent of Michelangelo, not just because of its anatomic veracity, but because of its imperfections too. It's the asymmetry and minute idiosyncrasies of David's body that make his figure plausible as a living, breathing human being. This is not to say that Michelangelo did not combine his medical knowledge with artistic license. Keen observers note that the upper body is slightly too large for the legs, so as to enhance the sense of David's strength; the eyes, too, are a little protruded. Michelangelo married together these aesthetic enhancements with anatomical correctness to convey a story as well as creating a piece of art pleasing to the eye. These details, plus many more that I won't mention (but you can find them here), make David all the more striking and memorable. It's an approach somewhat akin to the almost invisible smile in Leonardo Da Vinci's Mona Lisa - an infinitesimal detail that radically enhances the artwork's appearance.

If you want to learn more about Michelangelo, why not take a look at our new book here

In fact, Leonardo was also a key adoptee of anatomical art, if not one of the most important practitioners of its techniques. A renowned scientist as well as an artist, Leonardo compiled a huge cache of sketches in which he mapped the body, studying the relationship between limbs and bodyparts and pursuing a formula for anatomically correct proportions.

Though radically accomplished for his time, one of his most well-known sketches is The Vitruvian Man. An attempt to map the body in accordance to nature's laws, the man splayed within the circle and square is just one example of how well Leonardo understood the proportions of the human body. His research was developed from the workings of the Roman architect Vitruvius, who was rewarded by becoming the picture's namesake.

Leonardo did not do things by halves though, and over the course of his life he penned many hundreds more illustrations of the body. His studies were aided by the Hospital of Santa Maria Nuova, who granted him permission to perform dissections on human corpses. As well as detailing the skeleton, plus every muscle and the sinews that coated them, Leonardo also found himself drawn to less ordinary figures, such as those at an advanced age or who bore physical deformities.

The pioneering work of the above artists helped facilitate the work of anatomist and physician Andreas Vesalius. His key work De humani corporis fabric ('On the fabric of the human body in seven books') is a book that shows incredibly detailed sketches of the body, building upon the artwork of Renaissance artists. He was able to add further detail due to the heightened knowledge of the human body that familiarity with dissection allowed him. Vesalius's magnum opus is a comprehensive exploration of the body's inner workings, from the organs to the circulatory system.

Though producing the tome cost Vesalius a good deal of money (much of which was due to the time it took him to compile the work), the 28-year-old was rewarded with almost instant widespread acclaim, recouping his early losses in a very short amount of time. The work was lauded for not only its incredible scientific value, but also for the astonishing artwork inside. Vesalius commissioned artists to create their images using a woodblock print method, meaning that incredible amounts of detail could be crammed into very small areas and then used for subsequent printing. The illustrations are so artistic that they are worthy of standing alongside pieces of art created in their own right – a particularly impressive set of images is shown above, depicting the steady layering of bones, muscles, sinew and more across a series of bodies standing against one continuous landscape.

If you're interested in developing your own anatomical art skills, you'll love our new title Anatomy For Artists: Made Easy. With detailed advice and clear, annotated images, this is the perfect resource for anyone looking to make their figures looks as lifelike as possible. Take a look at the title on our website here, or on Amazon here.