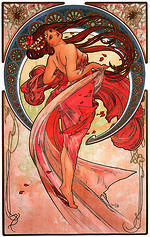 Today we start taking a look at Alphonse Mucha’s career from the beginning, starting with his amateur years.

Mucha was born on the 24th of July 1860 in Ivančice – a town in the South Moravian Region of the Czech Republic, an area that was at the time under Austrian administration. He spent his early educational years under the influence of Catholicism. At eight years old, Mucha attended a Catholic Church and school and it was here that he constructed one of his earliest paintings, Crucifixion. From this painting, anyone can see he possessed the artistic talent to become a successful painter.

The inspiration to draw and paint came directly from his time spent in church.  Mucha was captivated by the realistic artwork hung throughout this church. He grew such a deep appreciation of artwork; he always carried with him a pencil and whatever current project he was working on.

Later on, at the age of 12 – still creating and drawing whenever possible – Mucha was given a choral opportunity: to fulfil the position of alto chorister for the Church of St. Peter. The only way to further his secondary schooling and pay the school bills, he accepted the position and sung his way through his teens. During this time he met the famous deputy choirmaster and future composer Leoš Janáček. Still holding deep admiration for the paintings hung on the walls at church, Mucha would get mildly scolded for allowing himself to be distracted by them. Despite this however, he couldn’t resist the urge to make beautiful creations himself. Drawing in his room for hours instead of studying, Mucha was developing his own collections of drawings inspired from the church’s paintings.

Even after his voice broke in his early teens, opportunities were still presented to him to progress within the music industry, as he also had a talent for playing the piano and the violin. Regrettably, none of that mattered at the time for teenage Mucha; he was getting kicked out of school for missing too many classes. Mucha’s parents expressed huge disappointment in him. As a result, he went out with a friend and sung in the streets to make money and preserve his unpretentious life. Mucha did, indeed, earn money to survive, but his father put the street-living days to an end and forced him into a new official job. 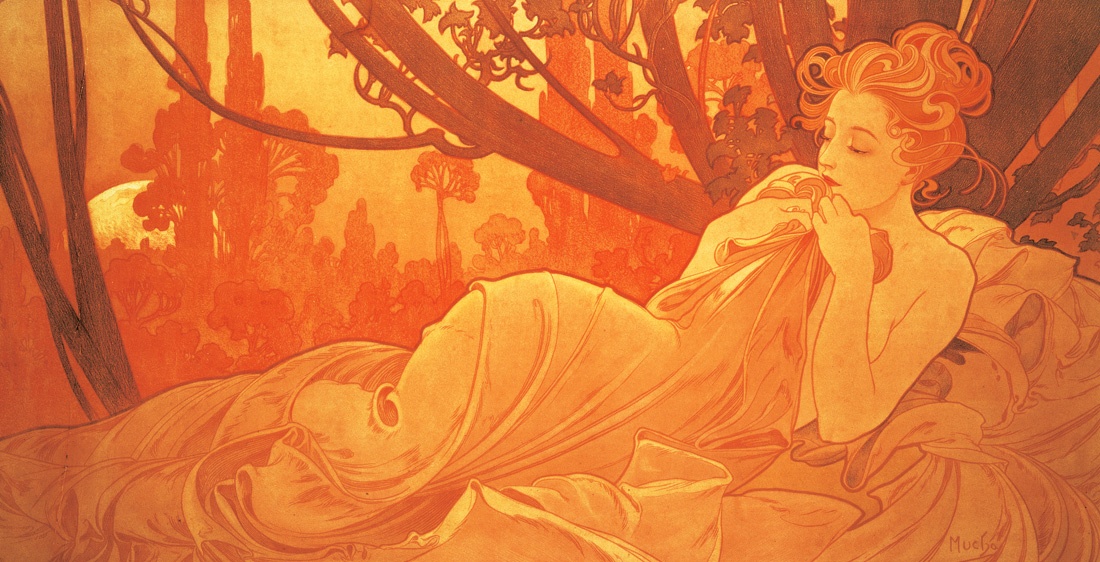 Despising this new office job, Mucha often took trips back to his old street-singing location. While heading back to Ivančice, he decided to stop at a local church. There he came across a wall painting in the Czech Baroque tradition painted by local artist Johann Umlauf. He stood in awe at the artwork and came to a realisation that artists were able to earn a living through painting. Mucha set off home, making the decision to become a professional artist. His dad was extremely supportive of this idea, as he has seen his sketches and the final pieces of artwork that Mucha had created since his childhood. In order to be considered credible for art school, Mucha arranged art lessons from various professors. Soon after, Mucha’s father helped him apply for the Prague Academy of Fine Arts. He was denied entry to the school, but that didn’t put him off as it might have done other aspiring artists. The determined Mucha sought out professional artists and searched for other opportunities.

At 19 years old Mucha visited various cafés and bars, sketching characters and scenes for food and cash. Boarding with Julek Stantejsky, the pair made a visit to a nearby church and met the local painter, Johann Umlauf. Inspired by his great work as he had been before, Mucha began to paint and become more acclimatized to the art world.

Shortly after, Mucha struck gold. He made a successful application to become an apprentice scenery painter at Vienna’s Kautsky-Brioschi-Burghardt theatre design company. Reflecting back on his early life, Mucha realized that if he had not capitalized on the singing talents he had in his early life he wouldn’t have been given this opportunity. All of the events leading up to that point in his life had contributed significantly to the start of his successful artistic career.

There ends Mucha's amateur years. In our next blog we'll look at the art nouveau pioneer's first steps into become a professional artist and his resulting masterpieces of art. So make sure you stay tuned to our blog and follow us on Facebook and Twitter for up-to-the-minute updates.

If you want even more Mucha information, including a much more detailed at his life and works, along with stunning full-page reproductions of his works, look no further than our popular title Alphonse Mucha: Masterworks. Take a closer look at the book here. You can also click here for Amazon.