In the last of this month's Q&As with our July authors, we have Jonathan Janz. He talks about what it takes to succeed as a writer, some influences of the book and what's to come! Be sure to check in tomorrow for more writing inspiration!

A great many people believe in an afterlife, but opinions vary wildly on what that afterlife might look like. I’m fascinated by those whose hedonism and insatiable desire for power cause them to cling to the notion of eternal life here on earth. How would someone like that view the afterlife? And to what lengths would he/she go in order to bring about a resurrection or continuation of earthly life? These questions are explored in THE DARKEST LULLABY.

One theme I explore is how self-interest can spoil a relationship. The main characters in this story both have wants and needs; that’s how the world works. Yet one character is less willing to think about the other as the story continues on. This is partially due to the influence of the land and its spirits, but there’s unquestionably a personal flaw to blame here as well.

My wife and I (and our infant son) moved into an old house about twelve years ago. Though the place wasn’t in disrepair, there was a heck of a lot that needed to be done. One weird feature of the old house was an antiquated razor disposal system. That feature ends up playing a pretty major role in this novel.

I had an aunt, but she was thankfully one of the dearest people I’ve ever met. She helped raise me, and I can’t imagine what my life would have been like without her. For this book, I imagined what would have happened had she been the exact opposite: wicked rather than kind, possessive rather than generous of spirit, cold rather than loving. That’s partially how I created Aunt Lilith.

What are some of your favorite books about malevolent nature?

THE RUINS by Scott Smith is one that I enjoyed at the time, but has stayed with me and actually grown in my estimation as the years of stretched on. Another one that really influenced me was Algernon Blackwood’s “The Willows.”  There’s a unique sense of doom that this sort of horror can bring about. It’s one thing to face a human antagonist, or even a vampire or a werewolf. But when the very environment around you is hostile, you feel there’s no escape, nowhere to run. That’s partially what I hoped to capture in THE DARKEST LULLABY.

Thank you to Jonathan for taking the time to talk to us about character influences and telling us about The Darkest Lullaby. You can pick up this new FLAME TREE PRESS edition of his book, along with the other August releases now. It will be available in paperback, hardback and ebook. Check out our website for details.

Since then Jonathan's work has been lauded by writers like Jack Ketchum, Edward Lee, Tim Waggoner, Bryan Smith, and Ronald Kelly. Novels like The Nightmare Girl, Wolf Land, Savage Species, and Dust Devils prompted Thunderstorm Books to sign Jonathan to an eleven-book deal and to give him his own imprint, Jonathan Janz's Shadow Side. 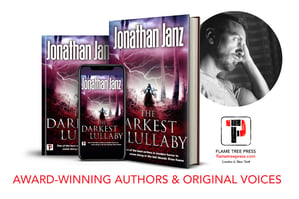 His novel Children of the Dark received a starred review in Booklist and was chosen by their board as one of the Top Ten Horror Books of the Year (August 2015-September 2016). Children of the Dark will soon be translated into German and has been championed by the Library Journal, the School Library Journal, and Cemetery Dance. In early 2017, his novel Exorcist Falls was released to critical acclaim.

Jonathan's primary interests are his wonderful wife and his three amazing children, and though he realizes that every author's wife and children are wonderful and amazing, in this case the cliché happens to be true. You can learn more about Jonathan at http://jonathanjanz.com. You can sign up for his Shadow World newsletter here: http://eepurl.com/cKLKt5. You can also find him on Facebook, via @jonathanjanz on Twitter, on Instagram (jonathan.janz) or on his Goodreads and Amazon author pages.