In the last of this month's Q&As with our September authors, we have David Tallerman. He talks about some of his writing spots, a few influences of the book and what's to come!

The book follows a number of characters, some adults, some children, through a world falling apart in the face of an epidemic that, when it isn't proving downright fatal, drives the infected to acts of violent, irrational behaviour.  As the situation develops, it becomes increasingly apparent that one of the few remaining safe places is the former low-security prison known as Funland and run by a man nicknamed Plan John, who saw what was coming and prepared accordingly.  But Funland is riddled with its own flaws and hazards, and those only grow more out of control as the various members of the cast come into conflict with each other.

At its heart, A Savage Generation is about generations: about relationships between adults and children, and the ways in which decisions impact and patterns of behaviour transmit down the bloodlines.  There are also some big questions in there about survival, both on the individual and the societal level, and whether the characteristics we traditionally associate with that are necessarily the ones that keep us alive in a crisis.  I guess the issue of what we lose when we stop listening and abandon compassion is one that's very relevant at the moment, and very hardwired into the book.

Not so much, but there are always traces that you draw on here and there.  On this occasion, as is often the case, I suspect that saying more than that would be sure to offend someone!

With A Savage Generation, it's tough to say, because it began life as one book and then, some years later, got hammered into a very different shape as I returned to it with fresh eyes and a somewhat different perspective.  I read Tim Willocks's Green River Rising and Jimmy Lerner's You Got Nothing Coming as part of my research process, so I'm sure they both contributed a little DNA.  Charlie Huston, a crime and horror writer who's nowhere near as well known as he should be, has been a regular influence, and I seem to remember encountering Cormac McCarthy around the time I began the book, so perhaps there's a dash of The Road in there.

Start out as a reader, and read as widely as you can, in both fiction and non-fiction.  Take the time to learn the intricacies of grammar, because the vast majority of learning writers don't and it invariably shows.  Train yourself to write every day, in as much as you possibly can - and perhaps even more importantly, train yourself to think about the stories you're telling even when you're away from them.  Seek criticism, and prepare for it to hurt; that's how you get better.  Understand that writing is a trade, and that it takes years to learn, like any other.  Oh, and really do keep a notebook by your bed, there'll come sleepless nights when you'll be glad of it.  Be brave, and be resilient.

This one evolved over a period of close to a decade, so it was begun in one place and finished, some years later, in another.  The first draft was written in a flurry in the spare room of a house I rented for a while in North Shields, in the north of England.  The rest of the process happened in my office, which has been my permanent workplace since I began writing full time at the end of 2013.

I write first drafts to music; I have pretty eclectic tastes, so that might mean rock or folk or North-African blues or nineties trance or Japanese heavy metal, depending on the phase I'm going through!  For later drafts, I need to concentrate more, and I've also got into the habit of reading out loud, so I'm drifting towards working in silence for those.

I'm a big planner, so long as I know where I'm going, I can write at a steady pace.  One of the tough facts about writing is that, the closer you get to finishing a book, the less creative the process becomes, and the less fun.  So the hardest part, for me, is trying to get work to a point that I'm willing to call done.

Being edited can be a joy or a horror, depending on the editor, and often it's the times when it's a horror that you learn the most!  But it's great to get an outside perspective, especially from someone who knows their stuff.  One of the most difficult aspects of writing is the tunnel vision that comes with being alone with a project for so long that you start to lose sight of the wood for the trees.

I'm midway through the second draft of Graduate or Die, the fourth and final book in my ongoing fantasy series The Black River Chronicles, which began in 2016 with Level One.  And at the same time, I'm researching an upcoming historical novella and wrapping up the last edits on another novel that hopefully I'll be able to announce soon.

Thank you to David for taking the time to talk to us about the A Savage Generation's influences and giving more life to the back story. You can pick up this new FLAME TREE PRESS edition of his book, along with the other September releases now. It will be available in paperback, hardback and ebook. Check out our website for details. 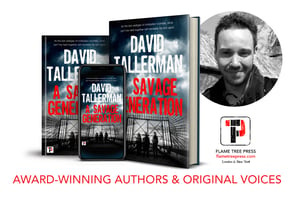 David Tallerman is the author of crime drama The Bad Neighbour with Flame Tree Press.  His other publications consist of the YA fantasy series The Black River Chronicles, which began in late 2016 with Level One and continued in 2017 with The Ursvaal Exchange, the Tales of Easie Damasco series - consisting of Giant Thief, Crown Thief and Prince Thief - and the novella Patchwerk.  His comics work includes the absurdist steampunk graphic novel Endangered Weapon B: Mechanimal Science (with artist Bob Molesworth).

David's short fiction has appeared in around eighty markets, including Clarkesworld, Nightmare, Alfred Hitchcock Mystery Magazine and Beneath Ceaseless Skies.  A number of his best dark fantasy and horror stories were gathered together in his debut collection The Sign in the Moonlight and Other Stories.

A lifelong fan of cinema, and particularly of Japanese cinema and animation, film has always been a significant influence on David's writing; though his inspirations also extend to comic books, genre fiction, and a degree in English Literature that led to an MA on the topic of seventeenth-century witchcraft.  His previous career as an IT Technician took him all across the country, but he currently resides in West Yorkshire, on the opposite side of the county of his birth.  In his spare time, and in between movies, he likes to hike around the local countryside, a hobby that has also taken him to wild spots throughout England and beyond.