In the first of this month's Q&As with our September authors, we have J.D. Moyer! He talks about what the themes of his latest novel are, some influences of the book and what's to come! Be sure to check in tomorrow for more writing inspiration!

The Guardian is about Tem, the nine-year-old son of a ringstation anthropologist and a village
hunter. The story take place in 2737, on a mostly depopulated Earth. What’s left of civilization
has migrated to orbiting ringstations, which are in competition to repopulate Earth. The main
villain, Umana (aka “The Squid Woman”), is a cybernetically enhanced environmental extremist
who wants to preserve the Earth as an ecological park.

Colliding worlds, and living as a foreigner.

Not the characters, but several of the Norse names (Trond, Esper, and Per Anders) are very
similar to the names of electronic music artists out of Oslo signed to my record label Loöq
Records. As far as I know only one of them is aware of this fact, and fortunately he seemed
pleased.

Iain Banks, one of my favorite authors, who died around the time I was coming up with ideas for
The Sky Woman (Book 1 of Reclaimed Earth). In my opinion Bank’s Culture series is one of the
great masterpieces of science fiction.

very writer needs to find their own process, but what works for me is having a regular time to
write, and to write regardless of my mood (don’t wait for inspiration). If I’m short on ideas, I take
long walks, read new authors, or go somewhere I’ve never been. I do take time off to recharge
but I’ve learned not to take long breaks — I get rusty. I’m fortunate to have some trusted
readers whose perspectives and life experiences differ from my own. It’s important to have
people who will honestly criticize your work while also supporting your efforts to succeed as a
writer.

Lately with music. I can’t write to every song, but sometimes the music perfectly matches the
scene. Spotify is great for music discovery.

Once I get started it’s not hard, but I’ll occasionally get stuck on a sentence that I just can’t get
right. I’ll edit my own work up to a point, but I need readers to help me spot inconsistencies,
false notes, boring bits, and other problems. My wife Kia is my first and best reader, but I also
rely on a few close friends, as well as my mother (who is also a writer).

I’m working on a new novel entitled The Savior Virus about a bioengineer who must choose
between two cult-like organizations trying to influence the course of human biological evolution
via involuntary epigenetic manipulation.

Who’s your favorite character in The Guardian?

I enjoyed writing Tem, the main protagonist, because I vividly remember being that age, and I
drew from my own “colliding worlds” experiences (I was a California kid living in Europe). I also
loved writing Egil the Bard, for his stubbornness and curiosity. And of course the villainous
“Squid Woman” Umana — I got to explore and express my Jungian shadow.

Do you think the futuristic scenario presented in The Guardian is possible or realistic?

If we don’t effectively plan for, and find ways to mitigate mega-disasters (climate change,
supervolcanoes, asteroid strikes, etc.), then human depopulation does seem likely. Even
without any major disaster, human population will peak sometime this century. It’s naïve to think
that we’ll “plateau” at that point. Biological populations that rise steeply never plateau—they
always crash. Why would our species be an exception?
Hopefully our evolutionary descendants (virtualized people, human-machine hybrids, etc.) will
carry the torch of civilization forward, and knowledge and culture will be preserved. But progress
isn’t inevitable.

Thank you to JD for taking the time to talk to us about character influences and telling us about The Guardian. You can pick up this new FLAME TREE PRESS edition of his book, along with the other September releases now. It will be available in paperback, hardback and ebook. Check out our website for details. 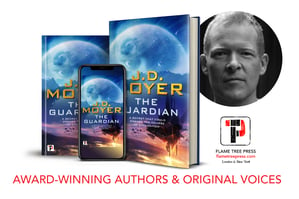 Recurring themes in his fiction include genetic engineering, the sociological effects of climate change, virtualized consciousness, and evolutionary divergence.