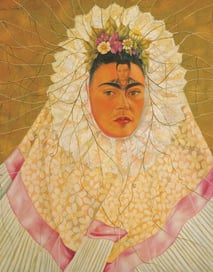 Years later, in 1928, the two would meet again. In the six years in between their first encounter and their second, Frida would have the accident that came to define many aspects of her life and art, and Diego would reach the peak of his artistic career. After this chance second meeting at the party of a mutual friend, Frida took some of her paintings to Diego to see what he thought. He later said in his autobiography that it was clear immediately that there was an authenticity to her art. The two began a relationship, characterized by her father as ‘The Elephant and the Dove’, and by August of 1929 they were married. 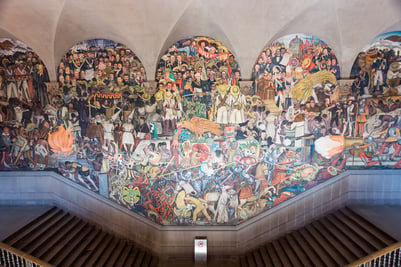 While now you can’t move for Frida Kahlo’s image (and occasionally art) plastered on every kind of merchandise imaginable, for many years she was seen as the eccentric wife of famed Mexican painter, Diego Rivera. While she almost continuously painted and created, her art was rarely featured in galleries and certainly not to the same degree as Diego’s. Diego was famed for popularizing the Mexican muralist movement and this dominates his greatest art. Many of what are now considered her greatest works were actually painted on trips where she was travelling with Diego as he had been commissioned to paint murals for companies like the California School of Fine Art or Detroit Institute of Art.

One of Diego’s most famous murals is Man, Controller of the Universe, originally intended to be named Man at the Crossroads. It was to adorn the lobby of the main building on Rockefellar Plaza, but upon the noticing of a portrait of Lenin in the mural, production was halted. Nelson Rockefeller asked for the portrait to be changed but Rivera refused and would later re-create the mural in Mexico City.

This represents a very key part of both Rivera and Kahlo’s identity. They were staunchly communist and while this is still key when Rivera’s work is examined; it is often absent or diminished in work on Kahlo’s art. It is treated more as a footnote and acknowledged when unavoidable or as an interesting tidbit but it was a central feature in both of their lives. 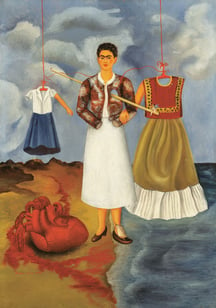 Over the past few years we have seen the development of ‘Fridamania’. Frida Kahlo now not only dwarfs her husband’s reputation but the reputation of most artists as a now giant figure in pop culture. She has become one of the most recognizable faces in the art world but this has not directly translated into sales of her actual work.

Very few of her works have come up for sale in the last 10 years, although this may be affected by the fact that lots of her paintings have been held in Mexico under trade laws. The prices for her work at auctions have also been extremely erratic when they do come up and a surprising amount in the past two decades have actually been passed on with no bids at auctions. Many art dealers and critics have discussed the fact that the lack of major paintings to supply the market has lead to the only sales being of her notebooks and drawings that there is little interest in.

This is a problem shared by her husband’s art. Much of the art by Rivera that is currently being sold is made up of sketches and drawings, and while Kahlo’s work does generally sell for more, he seems to have a more continuous presence in the market. While Frida may have now switched places with her husband in public popularity or interest, the lack of available art has meant she has not had the same effect in the art-buying world. There is little doubt that if one of her most famous pieces came up now, at the height of ‘Fridamania’, it would break all sorts of records.

During their lives, Diego and Frida were recognized for their art and their politics above all else but in recent years Rivera is rarely mentioned outside the context of Kahlo, who in turn is being seen more as a pop culture figure. More and more ideas have been retroactively applied to the pair and often the focus is shifted from their politics and their art to their relationship or respective images.

This post is based off extracts from our book Masterpieces of Art: Frida Kahlo (ISBN:9781786644824). This title is part of our Masterpieces of Art series which is packed, with tonnes of information and beautiful images. You can order it from our website here or on Amazon here.