In the next of this month's Q&As with our March authors, we have Robert Mitchell Evans. He'll be explaining what 'The Vulcan's Forge' is all about, giving advice to aspiring writers and the influence that films had on the novel! Be sure to check in tomorrow for more writing inspiration!

It is about a man who rebels against the tight social constraints of his culture and gets drawn into a web of crime and subversive enemy agents.

A central theme, and one think that noir fiction tackles quite well, is the relationship between the individual and their larger culture. What does an individual owe to their society at large and what does the society owe in return. It's a fascinating question because there are no hard and fast right answers. There is a tension that is not only unresolved but it unresolvable.

What was the most challenging aspect of the novel to write?

I think a central tone in all noir is one of cynicism. While good characters exist in the noirs they are usually sidelined and ineffectual in altering the inexorable direction of the plot. My long form fiction is usually optimistic, a fiction where nobility and morality matter and are ultimately victorious and in noir that gets inverted. I was uncertain that I could maintain a cynical tone for 80,000 words but I also believe that a writer should often get outside their comfort zone to find their new limits.

Not so much as who as what. My earliest memory is of watching movies. Growing up in the American South before the collapse of the drive-in market gave me a chance to see a lot of film that played regionally and sparked my life-long love of film. Not only was Vulcan's Forge inspired by merging the classic film noirs stories such as Double Indemnity with far off science-fiction but having my central character steeped in film allowed me to indulge my passion as an exploration of American culture and what it tells us about ourselves.

Write, finish what your write, never self-reject, that is even if you think they will reject your submission you submit. It is your job to write and theirs to accept or reject. Learn to not only accept but to give critiques. I learned far more sitting in my beloved local writer's group thinking about why a piece someone else wrote did not work for me than I ever did from comments I received, and I got some great feedback. When you learn to critique well you will have sharper tools for your own work.

Why are films featured so prominently in your book?

In addition to my personal love for film I think that there is a lot that you can learn about a culture by their popular arts. That prompts the concept that if you can learn about a culture and you create culture by the popular arts. Now in a large interconnected world like ours that is a very difficult proposition because you are both not starting with a blank slate, there is the weight of centuries of culture and there is a constant influx of messages an arts from exterior sources, but an isolated colony creates a unique environment, particularly when the founders of that colon had very specific ideas of what was wrong with their own culture. So there are in story reasons for the film references but it was also a way to use the story as a method of a way to holding a mirror to America as it has been and of course as it was when I wrote the book. After all, all art reflects the times in which it was created.

What surprised you most in writing the book?

How easily I slid into the cynical mindset that the noir required. My short fiction often ends with dark turns and tragic failure and I held off on tackling 'Vulcan's Forge' for some because I doubted my ability to sustain my own dark nature for the length of the novel but once I proceeded past the outline and starting bending words and hammering out sentences the creative flow worked the same at novel length as it had on my short horror fiction. The story took off and I just had to keep an eye on my outline.

So you use an outline when you write?

On longer pieces I find an outline essential. I can never complete something as detailed as a novel without a decent outline but with short fiction all I need is my opening and my ending. I find that endings are essential and I can't write anything unless I already know how it ends. To me the point of the story is usually illuminated best by its ending.

What interests you most as a writer?

I'm fascinated by moral dilemmas and choices. There is also a fun place for adventure fiction but to me both as a writer and as a reader I am most engaged when the resolution of the plot isn't just stopping the bad guy or thing from happening but when a character is torn between what they want and what they believe in. Easy choices make for forgettable fiction, don't you think?

What are you writing now?
I'm working on a number of projects. I have a series of military SF adventures about an American serving in the European Star Navy. Also there are a couple of Shakespeare's plays that I would love to explore in a science-fiction setting much like how The Tempest inspired Forbidden Planet.

Thank you to Robert for taking the time to talk today about Vulcan's Forge. You can pick up this book, along with the other March releases now. It will be available in paperback, hardback and ebook. Check out our website for details. 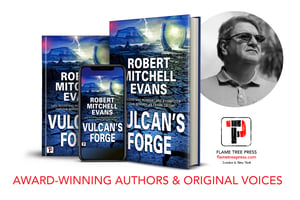 Robert Mitchell Evans was born in North Carolina but split his early life between that state and sunny Florida before brief and ultimately unsuccessful tour in the United States Navy.

A life-long enthusiastic fan of film and genre fiction Robert's interests include all form of science, history, and politics. He has played role-playing games since the early 80s and enjoys a wide array of board and card games as well. He haunts local conventions and his favorite Shakespearean play is Macbeth. Like so many ex-sailors he lives in San Diego with his sweetie-wife and an ever-growing film library.