In the first of this month's Q&As with our March authors, we have Tim Waggoner. He talks about who he based his characters on, advice to aspiring writers and he gives us a sneak peek into what he is working on at the moment! Be sure to check in tomorrow for more writing inspiration!

The Forever House is about an inhuman family called the Eldreds who feed on the negative emotions of humans. They move into a neighborhood, lure their neighbors into their house, and confront them with nightmarish scenarios designed to heighten their darkest emotions so that the Eldred can feed. The humans drawn into the Eldreds’ trap are forced to overcome their differences and work together in order to survive – if they can.

The themes of The Forever House are the bonds – and fractures – within families, how we can never really know what goes on in the minds and hearts of those closest to us, how people in modern American society are disconnected from each other, how people all too easily succumb to prejudice and hate instead of focusing on what unites us, and what would people do when faced with the choice to make their darkest, most forbidden desires come true?

There are a number of authors whose dark fantasy has influenced my own: Ray Bradbury, Charles deLint, Clive Barker, Stephen King, Neil Gaiman, Caitlin R. Kiernan . . . but one of the strongest influences is the work of Jonathan Carroll. The first novel of his I read was The Land of Laughs, and if was a perfect fusion of fantasy and horror – exactly the kind of work I was trying to produce myself. If you could analyze the artistic DNA of The Forever House, you’d find a great deal of Carroll in it.

Right now I’m working on a tie-in novel set in the Alien universe called Alien: Prototype. I was in high school with the original novel came out, and if you’d told me then that one day I would be writing a novel about a Xenomorph, I wouldn’t have believed you. It’s a wonderful privilege to get to play in someone else’s sandbox like this, and I’m having a blast!

Thank you to Tim for taking the time to talk today about The Forever House. You can pick up this book, along with the other March releases now. It will be available in paperback, hardback and ebook. Check out our website for details. 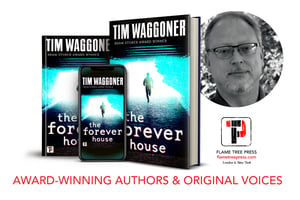 Tim Waggoner’s first novel came out in 2001, and since then he’s published close to fifty novels and seven collections of short stories. He writes original dark fantasy and horror, as well as media tie-ins. His novels include Like Death, considered a modern classic in the genre, and the popular Nekropolis series of urban fantasy novels, as well as The Mouth of the Dark and They Kill, both published by Flame Tree Press.

In 2017 he received the Bram Stoker Award for Superior Achievement in Long Fiction, and he’s been a multiple finalist for the Shirley Jackson Award and the Scribe Award. His fiction has received numerous Honorable Mentions in volumes of Best Horror of the Year, and in 2016, the Horror Writers Association honored him with the Mentor of the Year Award. In addition to writing, he’s also a full-time tenured professor who teaches creative writing and composition at Sinclair College.