Drawing in crayons or coloured chalks is the simplest method of putting colour on a surface, usually paper or cardboard. It has the advantage over other methods in that the artist can see immediately how the picture is progressing and how it will look when completed, whereas in those methods where pigments are mixed with oil or water, the end result is never obvious until the paint has dried.

The chief drawback about pastel, however, is that the colour, essentially fine chalk dust, does not penetrate the medium but lies on the surface and is therefore easily disturbed. Lay one sheet on top of another and you will get an offsetting of the colours on the back of the top sheet. Pastels are prone to rubbing or surface disturbance unless carefully preserved under glass, and even then there is always a tendency for the colours to migrate. The fugitive nature of the chalk can be used to create subtle tones by gently rubbing with the fingers to blend one colour with another.

In recent years, moreover, there have developed various types of soluble pencil which combine the control of a top-quality chalk with the natural fluidity of watercolour, releasing an infinite range of tonal variations. It is possible to create a picture with ‘dry’ pencils then go over it lightly with a wet brush to produce a watercolour effect which, because it penetrates the paper, becomes truly permanent. Or one can work with crayons dipped in water to produce a watercolour effect from the outset, or use a mixture of both techniques.

Although their composition is different, coloured wax crayons are used in the same manner as chalks to create pictures. The wax substances have a more adhesive quality than chalk but are less permanent than oil paints or watercolours, but the application of heat melts the wax so that it penetrates the paper and is thus fixed permanently, and the same heat treatment is used to merge the colours and soften the edges.

Just as the invention of oil painting is often credited to Jan Van Eyck (1390–1441), so also the invention of pastel or crayon has been attributed to various people, notably Johann Alexander Thiele (1685–1752), a landscape painter and etcher of note, or two ladies from Danzig (now Gdansk) named Vernerin and Heid (1688–1753) who were exact contemporaries of Thiele. French art historians, on the other hand, credit the portraitist Robert Nanteuil (1623–78) with the invention. Dietrich Moyer of Switzerland (1572–1658) was a great innovator who experimented with various techniques, and these certainly included drawings in coloured chalks, though he is better remembered as the alleged inventor of soft-ground etching. It may well be the fact that one or other of these persons devised a method of producing coloured chalks in the form of sticks, but chalk drawing had certainly existed long before their time, for Hans Holbein (1497–1543) and Guido Reni (1575–1642) both created some portraits in this medium. 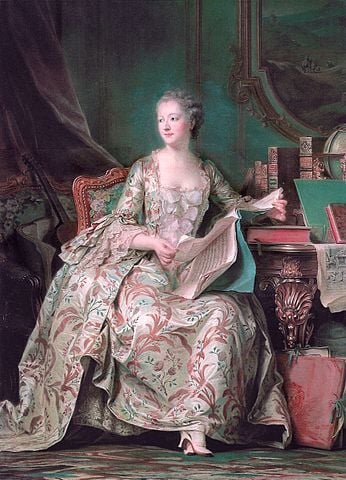 Whatever the precise origins of pastel, it triggered a distinctive movement in portraiture in France which, in the years leading up to the Revolution, enjoyed immense popularity and attracted the serious attention of many oil painters, notably Jean-Antoine Watteau (1684–1721), Francois Boucher (1703–70), Jean-Baptiste-Simeon Chardin (1699–1779) and Jean-Baptiste Greuze (1725–1805), although the leading artists in this medium were those who concentrated on it. The pastellists were led by Louis Tocque (1696–1772), the son-in-law of Jean-Marc Nattier (1685–1766) who was one of the first artists to exhibit pastels at the Salon (in 1747). Another leading exponent was Hubert Drouais (1699–1767), who exhibited five pastel portraits at the Salon of 1746.

However, the greatest French master of this medium was Maurice Quentin de la Tour (1704–88), who employed pastels very effectively in portraiture. He was, in fact, a portraitist, first and foremost, for whom pastel was the ideal medium for capturing the fleeting expression of his sitters, and the results vividly bring to life the sparkle, wit and gaiety of French society of the Ancien Regime. In this regard the only artist who came close to him was Jean-Baptiste Perroneau (1715–83), who produced many pastels, remarkable for their use of colour.

Pastel was virtually the closed preserve of the portraitist, although Simon Lantara (1729–78) pioneered the use of pastels in landscapes. The Venetian artist Rosalba Carriera (1675–1757) was equally at home working in oils or pastels. During her time in Paris she was attracted to the freshness and lightness of the latter medium, and in her later career she produced a considerable number of quite remarkable portraits in pastels. During her extensive travels around Europe she did much to popularize the new medium. Indeed, her success encouraged other female artists to follow suit – the most notable being Elisabeth Vigée-Lebrun (1755–1842), who executed many fine pastels in addition to her portraits in oils on canvas. In Switzerland – where Moyer had led the way with his chalk drawings of the early seventeenth century – the principal exponent of pastels was Jean Etienne Liotard (1702–89), arguably one of the greatest pastellists of all time, whose portraits entitled La Belle Chocolatière (1745) and La Belle Liseuse (1746) established his reputation.

Painting with crayons was well established in England at an early date. John Riley (1646–91) produced numerous portraits in this medium, many of them formerly attributed to Sir Peter Lely (1618–1680). Francis Knapton (1698–1778) produced a prodigious quantity of pastel portraits, particularly of royalty and nobility. William Hoare of Bath (c. 1707–92) studied pastel in Paris and Rome and raised the English technique to new heights. Francis Cotes (c. 1725–70) studied under Carriera and helped to develop a purely English style of pastel painting.

This medium attained its peak in the hands of Cotes’ pupil John Russell (1745–1806), who displayed an unsurpassed grace and elegance in his many fine portrait studies. Russell worked primarily in pastels and greatly extended the range of the medium, producing excellent groups as well as genre and historical subjects. There were many other artists working in pastels who demonstrated vividly that, in skilled hands, this medium was the equal of oils. Richard Cosway (1742–1821) and his wife Maria (1759–1838) – though perhaps better known as miniaturists – were also masters of this technique.

Interest in pastels declined at the beginning of the nineteenth century. It continued to be practised by amateurs, but the only professional British artist of note to make a major contribution to the medium was Henry Bright (1814–73), who concentrated on landscapes. Interest revived in the 1860s and led to the foundation of the Société des Pastellistes at Paris in 1870. The medium attracted the serious attention of artists whose reputation in other fields was already assured. Foremost in this group were James McNeill Whistler (1834–1903), Jean François Millet (1814–75) and Edgar Degas (1834–1917).

Indeed, Degas made pastels very much his own medium. Although he painted in oils on canvas, he explored colour and texture and in the course of his experiments he turned to pastels, developing his own highly distinctive technique which involved the application of fine chalk lines, criss-crossing like a woven fabric, often superimposing one colour on another in such a manner that the earlier colours peeped through. Degas experimented with a very fine spray of water covering the chalk that he then worked up into a paste which he could manipulate with his fingers or a brush with stiff bristles. He also experimented with steam or heat to melt the pigments and achieve similar effects. Ironically, Degas turned more and more to pastels as his eyesight failed, but his innovations helped to stimulate renewed interest in the medium and reveal exciting possibilities which were taken up by other artists.

By the end of the nineteenth century pastel-painting was well established once more and attracted the serious attention of many artists of the first rank who further extended the medium. There were artists, such as Odilon Redon (1840–1916) in France, who applied pastels to vellum or parchment. Aristide Maillol (1861–1944) was primarily a sculptor, but he used coloured wax crayons to sketch his ideas for those splendid nude figures he modelled, and nowadays these crayons are regarded as great artworks in their own right. Emile Wauters (1846–1933) in Belgium achieved a notable success with his numerous life-size portraits whose strength, vitality and sophistication had an immense impact at the turn of the century and in more recent years his fellow countryman Léon Spilliaert (1881–1946) has successfully combined pastels with watercolours.

If you want to learn more about techniques and styles, our book How to Paint Made Easy comes out at the end of the month and can provide wonderful insight on how to get started on creating beautiful paintings.

Alternatively, if you want to know more about pastel artists, our Edgar Degas Masterpieces of Art book explores his evolution through subjects and mediums, featuring his well-known depictions of the French Ballet.