No account of methods and techniques could be explored without some reference to perspective – the subject of today’s blog. ‘Perspective’ is defined by the Oxford English Dictionary as, ‘The art of representing three dimensional objects on a two dimensional surface, so as to convey the impression of height, width and relative distance.’

Perspective was blithely ignored by the earliest primitives; even if Greek paintings of the sixth century BC are no longer extant, we have the startling example of Athenian coins in which the goddess Athena, depicted in profile, has an eye that stares straight out of the coin at us. This is decidedly disconcerting, and must have seemed so at the time; yet it remained unchanged throughout the Archaic period. Interestingly, this position of the eye was a characteristic of many of Picasso’s Cubist paintings of the early twentieth century as he tried to show several different aspects of the subject simultaneously.

In the art of the past two millennia artists were originally concerned with rhythm and harmony in composition, then changing from a static pose of figures (as shown on the friezes of Egypt and Greece) to an impression of movement when it was realized that the arrangement of figures within the confines of the picture could make a considerable difference to its overall appearance.

After the Romans, the problem of perspective was not confronted again until the Renaissance. Significantly the first painters to study this were those who had trained in a sculptural medium and were primarily concerned to convey in the two dimensions of flat painting the impression of three dimensions. They knew that a straight road with parallel sides ran in a straight line and that at the end the sides were as far apart as ever; yet when they gazed along it they had the impression that the lines drew closer together and eventually reached a point at which they vanished altogether.

Paolo Uccello (1397–1475) is credited with being the first painter to have grasped the basic principles of perspective and apply them successfully to his pictures. In the early part of his career he had worked with the sculptor Lorenzo Ghiberti (1378–1455), whose great bronze bas-reliefs exhibit an early and probably subconscious understanding of the concept of converging lines.

It should be emphasized that Uccello was by no means the first artist to make a successful attempt to convey perspective – Chinese artists had been doing just that for hundreds of years – but he was the first to explain and interpret it. The Florentine architect Filippo Brunelleschi (1377–1446) exhibited a mastery of perspective in the design of the high-domed cupola of Florence Cathedral and wrote treatises on the subject. Other painters, such as Leon Battista Alberti (1404–72) and Leonardo da Vinci (1452–1519), quickly developed the theories of Uccello and Brunelleschi, and it was Piero della Francesca (c. 1415–92) who brought the concept to a triumphant conclusion by discovering the principle of the vanishing point, the point at which receding parallel lines appear to meet when represented in linear perspective. Uccello himself showed his understanding of this principle in his great panoramic view of The Hunt in the Forest, painted in the early 1460s.

Other notions, such as the apparent diminution in size of objects farther distant and foreshortening (the deliberate compacting of a detail to create the illusion of depth), were refined within a few years. Understandably the perspective of curves and circles took longer to grasp. Globes and balls, for example, may appear as ovals or even irregular shapes, depending on the angle from which they are perceived. Subconsciously artists realized this, but without some knowledge of advanced geometry they did not understand why it should be so, and therefore the creation of the correct illusion was not always achieved.

However, One artist, Masaccio (1401–28), showed an early and precocious understanding of the perspective of curves, triumphantly exhibited in his Trinity (1425), which inspired one of the most perceptive passages in the writings of Giorgio Vasari, describing the barrel vault ‘drawn in perspective, and divided into squares with rosettes which diminish and are foreshortened so well that there seems to be a hole in the wall’.

Nevertheless, Uccello’s discoveries were quite revolutionary. Suddenly artists realized that they could not just show the outline of a subject but depict it in the round. Hitherto this could only be hinted at by the adroit use of highlights and shadows, but until the geometry of perspective was understood paintings could not take on the illusion of three dimensions. From the time of Uccello and his colleagues onwards, however, people could not just look at a picture, they could now look into it as well.

Later generations of painters would refine  the principles of perspective by using light and shadow to give greater depths to their pictures, a notable exponent of light and darkness being Georges de la Tour (1593–1652). In general the scenes depicted were at the spectator’s eye-level, but Rembrandt (1606–69), in his great canvas The Blinding of Samson (1636), employed a very unusual angle, as if looking directly down on the scene, in order to heighten its dramatic effect. 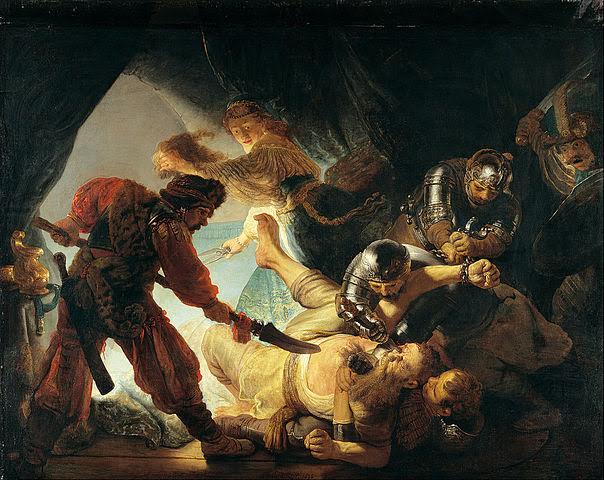 Dealing with perspective is still an essential part of any artist’s work today, and if you’re an aspiring artist yourself, you should check out our brand new book How to Paint, available on our website from the end of this month. It is packed with examples and covers working in a wide range of mediums, including digitally.