In the first of this month's Q&As with our October authors, we have J.H. Moncrieff! She talks about what the themes of her latest novel are, some influences of the book and her favourite thing about being a writer! Be sure to check in tomorrow for more writing inspiration!

No, never, though I may borrow some names. Even if I start writing with someone I know or met in mind, the character quickly develops a life and personality of their own.

The earliest seeds of this book were planted by Ian Ross’s play, An Illustrated History of the Anishinabe, which tells stories of the horrible injustices done to North America’s indigenous people. A lot of these stories I did not know, and to say they disturbed me would be a huge understatement. Not enough people know about what happened, and I knew I would write about this one day. The most chilling horror in the world is the atrocities human beings perpetrate on other human beings (and other species, for that matter).

Thank you to J.H. for taking the time to talk today about Those Who Came Before. You can pick up this new FLAME TREE PRESS edition of his book, along with the other October releases now. It will be available in paperback, hardback and ebook. Check out our website for details. 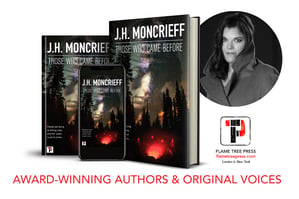 J.H. Moncrieff's City of Ghosts won the 2018 Kindle Book Review Award for best Horror/Suspense. Reviewers have described her work as early Gillian Flynn with a little Ray Bradbury and Stephen King thrown in for good measure. She won Harlequin's search for "the next Gillian Flynn" in 2016. Her first published novella, The Bear Who Wouldn't Leave, was featured in Samhain's Childhood Fears collection and stayed on its horror bestsellers list for over a year.