Next up for October's Q&As we have Frazer Lee! He'll be exploring some of the themes of his latest novel 'Hearthstone Cottage' and what he's working on now! Be sure to check in tomorrow for more writing inspiration!

Mike and his friends travel to the Scottish Highlands to celebrate their graduation at a holiday cottage. En-route, they hit and kill a stag and write off their car. Tensions build as Mike becomes plagued by terrifying nightmares and unwelcome visitors. Is Mike genuinely losing his mind, or is the cottage actually a place of dark and threatening power?

I tend to write about damaged people who find themselves in potentially damaging situations. The book examines the impact of modern life upon ancient spaces and old-world traditions, and how man’s arrogant dominance over the landscape can sometimes be his undoing. There are also maggots. Lots of maggots.

The characters are entirely fictitious, but do embody qualities I observe in people around me, and both the light and darkness I think we all possess, beneath the masks we tend to wear in public. I think that even the most flawed characters believe they are doing the right thing, even when they are not, and this blurs the line between ‘good’ characters and ‘bad guys’. I mean, is Sergeant Howie the good guy in The Wicker Man? Or is Lord Summerisle…? There are other stories aside from straightforward ‘hero’ narratives, and that’s something I enjoy exploring in my characters and their stories.

I was most influenced by the memory of spaces and their atmospheres, particularly visits to ancient sites such as West Kennet Long Barrow, the Rollright Stones, and Newgrange. The story’s premise began in a series of conversations about a proposed movie project with my friend, and the Director of Photography on my film projects, Alan Stewart, to whom the book is dedicated with thanks.

However crazy your idea might seem, trust me, someone else has always gone crazier. Don’t hold back, just throw it all down and you can always rein it later. Invest in a robust coffee making machine, you’ll need it. Oh, and switch your internet connection off until you are ready to emerge from your writing session.

I am incredibly lucky to live in a wonky old cottage that dates back to the fifteenth century, and I channelled every creaking wooden beam, every whisper of wind in the chimney, and every nocturnal tap at the window pane, into this book. I also wrote and edited on trains, on planes, at the British Library in London, and a variety of coffee shops.

I tend to write to music, especially film scores, and build playlists for particular projects so that I can ‘fast track’ back into them. This book was helped along by Christopher Young’s beautiful Hellraiser scores, and various works by Tangerine Dream including Force Majeure and White Eagle.

I have a horror film screenplay on the go, and am drafting my next horror novel, Greyfriars Reformatory. I am also researching my PhD, which examines the themes in my novels.

Thank you to Frazer for taking the time to talk today about Hearthstone Cottage. You can pick up this new FLAME TREE PRESS edition of his book, along with the other October releases now. It will be available in paperback, hardback and ebook. Check out our website for details. 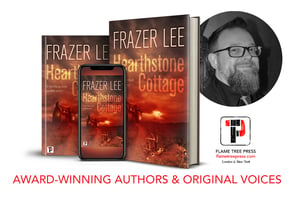 Frazer's novel The Lamplighters was a Bram Stoker Award® Finalist for Superior Achievement in a First Novel. His other published works include the Amazon number 1 horror/thriller Panic Button: The Official Movie Novelisation, novels The Jack in the Green and The Skintaker, and the Daniel Gates Adventures series of novellas.