Next up for October's Q&As we have Ramsey Campbell! He'll be telling you what his latest novel is all about, some advice to new authors and why he chose to start writing horror! Be sure to check in tomorrow for more writing inspiration!

The ghostly power of heredity, and the notion that ordinary families can produce or harbour monsters.

Thank you to Ramsey for taking the time to talk today about The Influence. You can pick up this new FLAME TREE PRESS edition of his book, along with the other October releases now. It will be available in paperback, hardback and ebook. Check out our website for details. 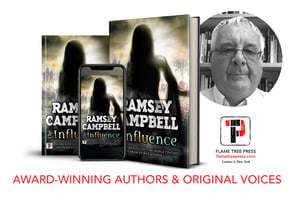 Ramsey Campbell was born in Liverpool in 1946 and still lives on Merseyside. The Oxford Companion to English Literature describes him as Britain s most respected living horror writer . He has been given more awards than any other writer in the field, including the Grand Master Award of the World Horror Convention, the Lifetime Achievement Award of the Horror Writers Association, the Living Legend Award of the International Horror Guild and the World Fantasy Lifetime Achievement Award. In 2015 he was made an Honorary Fellow of Liverpool John Moores University for outstanding services to literature.

Among his novels are Incarnate , Midnight Sun , The Count of Eleven , Silent Children , The Overnight , Creatures of the Pool , The Seven Days of Cain , Think Yourself Lucky and Thirteen Days by Sunset Beach . His collections include; Waking Nightmares, Alone with the Horrors, Ghosts and Grisly Things, Told by the Dead, Just Behind You and Holes for Faces, and his non-fiction is collected as Ramsey Campbell, Probably.