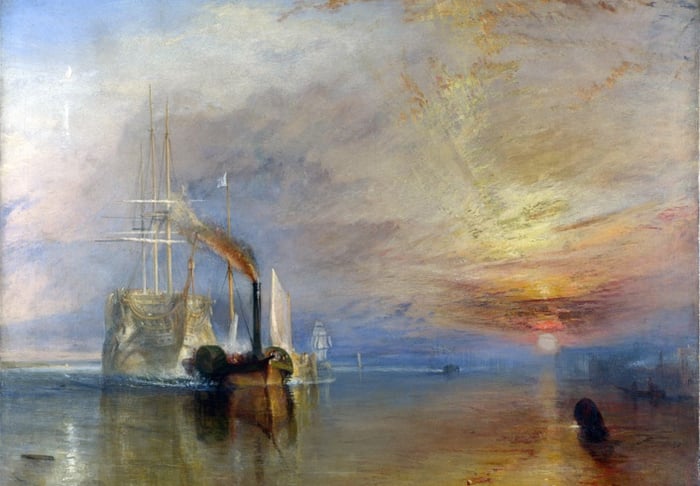 The Fighting Temeraire was a warship with 98 guns that was launched in 1798 and accompanied Nelson’s ship Victory at the Battle of Trafalgar. In this painting Turner commemorates the final journey of the old ship as she is towed up the Thames to be broken up. In the later years of the 1830s there was a renewed public interest in the old warships from the Napoleonic era that would have partly inspired Turner’s vision. However, the painting can also be seen as a comment on the decline of Britain’s mercantile power and his use of the evocative setting sun strongly symbolizes both this and the demise of the ship.

An interesting point to note is the juxtaposition of the fragile beauty of the old sailing boat being pulled to its destruction by the squat strength of the steam tugboat. This was a time when the advent of steam was taking hold and surpassing that of the old sailing boats; the advancement of steam power was something that Turner was fascinated by. The picture was first exhibited in 1839 at the RA, accompanied by two lines paraphrasing Thomas Campbell’s ‘Ye Mariners of England’: The flag which braved the battle and the breeze, / No longer owns her.

If, like us, you're a huge fan of J.M.W. Turner, take a look at our beautiful hardback book J.M.W. Turner Masterpieces of Art or our Tate – J.M.W. Turner wall calendar 2017 for a stunning Turner painting for every month of 2017.